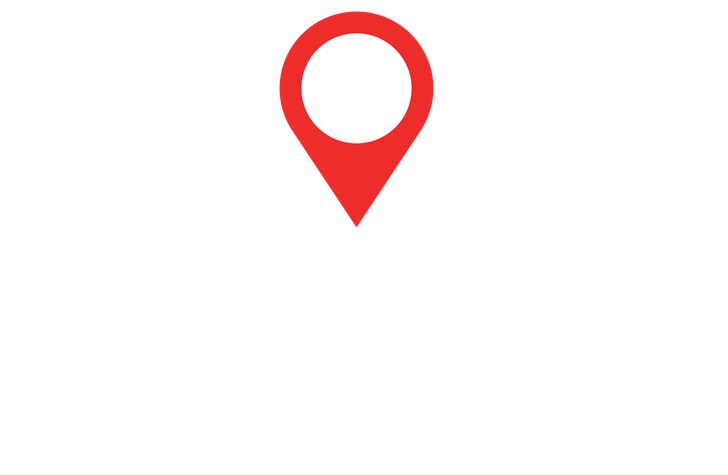 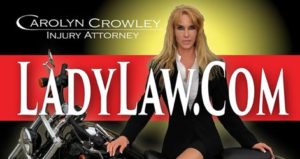 We’re guessing you may not have heard of the very friendly Carolyn Crowley, an Annapolis-based injury attorney with a passion for the motorcycle community. But we think you might know her alter ego: the intimidating Lady Law. Her billboard trucks are infamous throughout Annapolis. Get to know Carolyn and the story behind the Lady Law character in our interview during Eastport-a-Rockin 2018. Of course we’d be remiss if we didn’t include a link to her website: LadyLaw.com

Where In Annapolis: What message do you want to send with the image on the trucks?
Lady Law: If you’re injured: LadyLaw.com. If you’re injured: LadyLaw.com. If you’re injured:LadyLaw.com. That’s the message. Injury. Whatever injury, it could be slip and fall, it could be, you know, honestly it could be a dog bite, it could be anything. If you’re injured, call me. Just go to LadyLaw.com and find my phone number. That’s the message.
Where In Annapolis: So you said that it’s a little bit scary and you think, “Well, don’t you want your lawyer a little bit scary?” So is that sort of…
Lady Law: Well… I don’t know… I’m just joking around.
Where In Annapolis: Maybe a little bit intimidating?
Lady Law: People can be you know, kind of rude and they just kind of say things. And they don’t do it with intent to hurt me or anything. But they can be a little rambunctious at times. I mean, I get all kinds of messages from people.
Where In Annapolis: Now, you said you opened your law firm two years ago.
Lady Law: Correct.
Where In Annapolis: And then how long have you lived in Annapolis?
Lady Law: I grew up in Greenbelt, Maryland, in P.G. County. I went to Eleanor Roosevelt High School I was bussed into Mary Bethune Junior High. So I’m a Greenbelt gal. We call ourselves P.G. County gals. So I was there my whole life, I mean born and raised in Greenbelt. Then I went to Tampa, Florida and I lived in Tampa, Florida for almost 20 years, but I still practiced law in both states. So I was admitted to the Maryland Bar in 1993 and the Florida Bar in ’97. And I was also admitted to D.C. in ’93. So I’m a P.G. County girl. Although I do live and have an office in Annapolis, P.G. County is really my home.
Where In Annapolis: So what else do you want to say about your business or where Annapolis is going and growing and your business growing with it?
Lady Law: Well, I don’t know, you know everybody’s different and I’m not that politically tied into Annapolis and the know-how and everything like that. I do allow people to park their motorcycles behind my truck!
Where In Annapolis: Do ride on the back of motorcycles or do you go out riding a lot?
Lady Law: No, I don’t do either one is the truth of it. It’s just a matter of, I handle these injuries, I see the pictures. It’s made me too nervous.
Where In Annapolis: You’re just a friend of the motorcycle community?
Lady Law: Yeah, and I believe in the right to ride. I believe in the freedom to make your own choices within the laws. And so you know, my riders insisted on me getting a license, really. They’re like, “Get your license!” So I did go out and get it and it was difficult. You know I can ride a motorcycle, I’d ride a dirt bike when I was younger. But I don’t like to be on the roadways. I don’t like to trust these other drivers. But it’s a matter of choice. That’s my choice. And I think that everyone should respect riders’ choice to ride. It’s a way of life, really.
Where In Annapolis: Is this what you see yourself doing, injury law for…
Lady Law: The rest of my life! I’ll be 90 years old, hobbling up to the courthouse going, “My rider was not at fault!” But I handle car accidents [too] I mean actually the bulk of my business is car accidents. But what happens with those people is they send me their friends, their family. Once I do a great job for somebody, they refer in business. So I don’t really advertise on the vehicle accidents. But I like all the riders to know that I’m their “man”, so to speak, to go to.
Where In Annapolis: You have two practices, one in Maryland and one in Tampa?
Lady Law: Correct, I have two different offices, one office is in Towne Center. And the other office is in Tampa, FL which is on the west coast.
Where In Annapolis: Are they both “Lady Law”
Lady Law: Yup, both “Lady Law” definitely.
Where In Annapolis: Same website for both offices.
Lady Law: Absolutely, absolutely.
Where In Annapolis: Alright, I think I’m just about out of questions, is there anything else you want to share about yourself? People are going to be so interested to know the real person behind the intimidating Lady Law trucks.
Lady Law: Well, you know the real person behind it is: Before I went to Law School, my little brother was disabled and it really gave me a drive to fight for injured people in general. And in particular motorcycle accidents, but, you know, in every case. Maryland is a tough jurisdiction. You really have to fight hard. Because these insurance companies are so aggressive and if they know you’re going to stand down, you’ve got a problem. So if you want the maximum out of your case, my recommendation is go to LadyLaw.com.